Songs about Dinosaurs for Kids

The album “Dinosaur Songs” by Daddy Donut is easily the best album with songs about dinosaurs for kids. A future classic.

“Why are there no good pop songs about dinosaurs?” This was the question songwriter Carl -Otto Johansson from Sweden asked himself when his five-year-old son became interested in dinosaurs .

Many preschool children have a period when they become fascinated with dinosaurs. It usually happens at the age of four or five and (for most kids) last a year or two. Swedish musician Carl -Otto Johansson’s five-year-old was no exception to this rule. So Carl -Otto did what all other parents do. He got the books, the films and the toys. He realized that there was a  real abundance of dinosaur products to meet the interest of the kids. But something was missing … where were all the good songs about dinosaurs? Sure, there were albums with music about dinosaurs, but they were not very good. The only great song out there was “The dinosaurs song” from the Big Green Rabbit series, and that song was in English so it was no good for a Swedish kid.

So how was Dinosaur Songs born?

At home, we put music to everything, so making up songs about dinosaurs came naturally. I played the guitar while Svante was playing with his dinosaur toys and we started improvising. First about a meat eating T-rex, then a vegetable loving Triceratops and later an old, lazy Brachiosaurus. Pretty soon we had written a number of songs we both liked and it was then I got the idea of making an album for kids with only dinosaur songs. 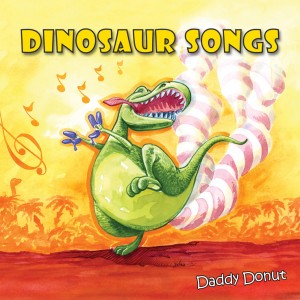 As I am from Sweden, the songs were first written in Swedish and released under the artist name “Pappa Kapsyl” for the Swedish audience.  The album was recorded in 2012 and the Swedish version was released in October that year. released on my own record label Pennybags . In 2013 I started working on the English version. I took the time to make the international version just as good as the original and it was released in August 2013. The album contains 12 tracks with a wide musical range . The most well-known dinos are there of course: Tyrannosaurus Rex, Brachiosaurus , Triceratops, Brontosaurus (I know, not a real dinosaur species any more) and a Pterosaur (yes, yes, technically not a dinosaur). There are also a few songs about some lesser known dinosaur species like the very small Tinysaur and the selfish Egosaurus.

Here is a five minute preview of DINOSAUR SONGS – the best album with songs about dinosaur for kids.