Stegosaurus – the bus of the Jurassic

I’m excited to announce that I will be producing a whole series of short programmes for my Youtube channel starting May 2015. It’s called ‘Dino Park’ and each episode will feature fun dinosaur facts for kids filmed at ‘A World of Dinosaurs Adventure Park‘ in Sweden.

I’ve only produced the intro clip so far. Check it out!

I’m proud to presents the first lesson in my language course SWEDISH FOR BEGINNERS (and silly people). Now you have the chance to learn a bit of Swedish in a fun and simple way. The footage for this first episode was filmed during the summer of 2013 when I was visited by my dear friend Mr. America from America. He agreed to be my guest and together we improvised and ended up with a bunch of clips. In this first lesson you will learn how to order a sausage in Swedish. Good luck with your Swedish!

Coming soon on Youtube: “Swedish for Beginners with Daddy Donut”. The aim of the course is to equip kids with some sort of fragmented knowledge of the Swedish language. Basic vocabulary and structures in Swedish are studied. The emphasis is on practical, spoken Swedish. That said, it doesn’t matter if you learn Swedish or not, the important thing is to have fun. First lesson: “Korv” (sausage). [UPDATE: Watch the first episode here.] 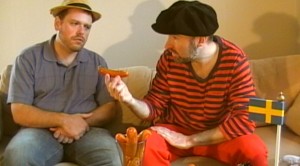 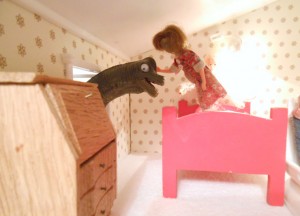 There is a Youtube video going around with a paper T-rex that seems to turn its head as you walk past it. Check it out.

You can actually download the T-rex for printout and make your own T-rex illusions at home with your kids. Here are the direct links:

And here is what the filmmaker writes about the video.

This is based on the famous dragon illusion which was inspired by Jerry Andrus. I’ve always wanted to try this illusion with several of these at once. I wanted to use 20 or 30 but after I tried a test with only 12, I realized 20 or 30 was going to be too many. So another thing I’ve always wanted to try was to have a large version. The original file was about 9 feet X 9 feet. I had to split the image into 4 files so the printer as my local print shop could print it. I traced all of the pieces on cardboard which I used to build a support structure for the prints. I used small pieces of cardboard and hot glue to make the structure really solid. One problem that I had was that the paper for the large dragon was really shiny. So if you look closely you can see the reflection of the eyes on the “top” and side panels. I bought some matte spray to try and minimize the reflections. It worked a little. Over all I was happy with the results.

When I discovered Dinovember I was blown away. It was just so great to see how parents Refe and Susan Tuma’s used their creativity to let their kids experience a sense of wonder and excitement about some plastic toy dinosaurs. The same day I found the Dinovember website I started writing a song called “The dinosaurs come alive at night”. It was one of those songs that pretty much wrote itself. I started recording it a few days later. Recording it took about a week. The month of November was over but I felt I wanted to do something to honor the initiators of Dinovember. So I made a music video from Refe’s and Susan’s photos. It’s now finished and available on Youtube. The song is not available on iTunes yet. Instead I made it available as a free download here on the website. That way you can make your own youtube video if you are a Dinovember fan. [UPDATE: The free download campaign is over. Now you can get the Dinovember Song on Bandcamp.]

So here it is: Dinosaurs come alive at night – The Dinovember Song

Lyrics to the Dinovember Song

it doesn’t happen every night, of course
and I don’t know why it’s just the dinosaurs

It’s happening all over
It’s spreading across the world
yes, I know it sounds all crazy and absurd

but the dinosaurs come alive at night…

Running from a T-rex available on iTunes

The video for the dinosaur song “Running from a T-rex” has been a great success on Youtube with over  million views to date. I’ve had requests from viewers asking where they could buy the video so that they could download it and have it available for their kids offline. I recently found out it was possible to distribute music videos via iTunes and so last week I sent it in. So now you can get “Running from a T-rex” from iTunes with a higher resolution and without the product placement at the end.

Here is where to get it:

I made a new music video for the song “Tyrannosaurus Rex” taken from the album Dinosaur Songs. It was shot during a beautiful summer’s day at the Donut family farm where Grandpa Donut lives. There are lots of animals on the farm which the Tinty T-rex seems to appreciate. Sheep, cows, cats. He’s also very interested in Grandpa’s feet. Mmmmmm… feet! At one point the Tiny T. rex takes the tractor and goes on a sheep hunt. Well, I hope you like it. I used a new video editing software for this video and I learned a lot. It’s fun making videos. It really adds another dimension to the music. The video is available on Youtube. Enjoy kids!